Today, a few copies of “American Fiction 16” arrived in the mail, which included my story “Puro Yakyū.” This anthology is part of an annual contest, and my story came in 3rd place. I can’t wait to read the rest of the book. You can order your own copy from New Rivers Press. There are 19 other stories in a handsome 300-page paperback, including 2 that were somehow judged to be better than mine. 😉 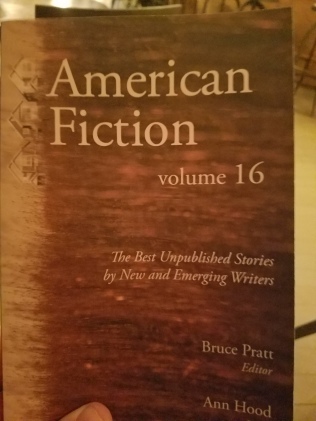 Short stories can be a strange beast for a writer. I started writing this story in Jan. 2014 and finished the first draft in Oct. 2015. That’s a season shy of 2 years. I set it aside a couple times and worked on other things, but this story was always on my mind. And for the most part, I understood exactly what I wanted to accomplish. I had plot points, I knew the characters well, and (in a rare occurrence) I was crystal clear on the thematic elements I wanted to convey. But still, I wrestled with this this one.

In my first swing at this story, Henry Fischer, the disgraced baseball superstar, was the protagonist. The story opened with him in the batter’s box facing down a rookie pitcher in the waning days of the Japanese professional baseball season (Puro Yakyū is the Japanese term for professional baseball). If you will forgive my lack of modesty, I will posit that the few pages I came up with were pretty good. but I struggled with where to go from there. I knew I had to introduce the hotel maid, Natsuku, Henry’s paramour during this expat season, but she felt like a prop, a character who only existed to serve another. This is not what I wanted from her. I had envisioned a character that turned the starfucker archetype on its head, but as a character, she had no agency with which I could achieve that goal. She was a baseball fan, but no mere groupie. Knocked up, but not trying to entrap the famous slugger. Someone who was enamored with Henry yet knew better than to ask anything of him.

When I tried opening the story from Natsuku’s POV, the story started to click. In her introduction, contest judge Ann Hood was kind enough to say “Through her point of view, a whole world is cracked open . . .  an ordinary character made extraordinary by the magic of the short story.” That really encapsulates the way I felt upon unlocking Natsuku’s voice in this story. In doing so, the story gained it’s heart, something Henry could never have provided. I loved all the Japanese-centric baseball stuff and how it existed alongside the ideas of legacies and connections, but those were questions that were so much more interesting to explore through Natsuku’s proximity to them.

With a 3rd person limited POV, I was free to go back and forth between the viewpoints, but Henry always felt distant to me. He’s a man who protects himself, and there’s less nuance in his motivations and subsequent actions. Natsuku, keeper of secrets that she is, offered depths to explore. Henry’s sections should serve to complement Natsuku’s, a vast departure from my original plan where she only existed in support of Henry’s quest. So that opening section I was so enamored with got moved to later in the story, about four pages in–our first introduction to Henry in the flesh. Trust me, it works so much better that way.

In February, I’m going to teach a class at StoryStudio called Radical Revisions. This is the sort of thing we’ll be trying to do: approaching our stories from completely different craft angles. Unfamiliar POVs, new settings, characterizations that challenge our norms and voices and styles that take us out of our comfortable ruts. I want to explore the sort of approach to rethinking and revising that finally made “Puro Yakyū” the kind of story that was ready to go out into the world. I’m really excited for this one.

On another topic, I was honored to learn that the editors at Salamander nominated my story “The Floatplane” (from this summer’s issue #44) for a Pushcart Prize this year. They had 2 stories in O’Henry and 1 in Best American Short Stories this fall, so it’s pretty much empirically provable that their taste in fiction is impeccable. Hundreds of stories are nominated for the Pushcart every year, so it’s a long shot, but a shot nonetheless. And many thanks to the editors at Salamander who gave that story a great home.

This entry was posted in Writing. Bookmark the permalink.